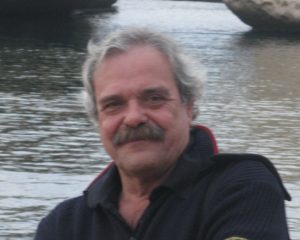 In 1991, I was going through a difficult time in both my personal and professional life.
After more than 15 years as a “visitor” at CERN I felt ready for fresh challenges.
I had learnt of course that a new research centre had been set up in Cagliari, a city that I did not know at all.
Quite intrigued, I spoke with Pietro Zanarini and, later, with Federico Carminati (then a member of CRS4’s Scientific Committee) and lastly with Professor Zanella; I soon became convinced this was the right opportunity for me.
In the spring of 1992 I went to Cagliari to visit CRS4 and the city; I was incautious enough to set out from Geneva even though I was ill with chickenpox, which I tried to cure under the sun of the Poetto beach. I hope I did not infect anyone.
To cut a long story short, I accepted the offer to work at CRS4, initially leading a parallel computing project for a simulation code modelling the interactions of subatomic particles, building on my experience gained at CERN. I started working full-time at the Centre from April 1993, but from October 1992 I had been spending one week a month in Cagliari.
This gave me the chance to celebrate my 40th birthday at the Forte Village resort in Santa Margherita, during the official opening ceremony of CRS4.
So, on 3 April 1993 I started a new phase of my life by boarding the ferry from Genoa.
In the meantime, I had found a home in Frutti d’Oro, halfway between Cagliari, where CRS4 had its provisional headquarters, and Pula, where the Science Park would soon (so I was told) be built, with the final headquarters of CRS4, which I would only see 15 years later.

Our project was approved and we started working on it. I was tasked with visiting the few European manufacturers of parallel computers and advising on which model the Centre should purchase.
I still remember that, during one of these visits, an engineer from Siemens Nixdorf in Munich asked me whether my choice to leave Geneva for Cagliari had been unwise (many had already told me that “Sardinia is good for your holidays, but not for working there” - did they mean people do not work in Sardinia?). Feeling a bit sorry for him, I replied that, in Geneva, when I went out in the morning to go to work, everything was grey and all I could see were bare trees, while now I could see on one side the sea, on the other side wetlands with wading flamingos and from the window of my office I had a view of blue sky and palm trees with dates. So, which was the better place to work in?

In July of the same year, a team of engineers from STMicroelectronics (then still called SGS-Thomson), a shareholder of CRS4, asked us to participate in a project to develop a new family of microprocessors for the digital TV market. Professor Zanella involved me in the discussions, also because I already had some experience with real-time systems and therefore the topic was not entirely new to me. In short, we struck up a partnership and set up a system software development laboratory (later called CLASS - Cagliari Laboratory of Application & System Software) with the participation, in addition to CRS4 and SGS-Thomson, of Techso, another private shareholder of CRS4. I was picked to run the laboratory; in January 1994 we began our activities with a visit to ST’s laboratories in Bristol, where I organised a small ceremony with panettone cake from Pula and bubbly Torbato spumante. The laboratory staffing gradually increased to about 50 highly qualified developers. However, at the end of 1999, for reasons that would take too long to explain, we were unable to achieve the natural result of the project: the establishment of a branch of STMicroelectronics in Sardinia.
Thus, the human capital developed by the CLASS project was dispersed between ST’s branch in Catania (to which I moved) and a few companies in the Cagliari area - Tiscali, Atlantis and later Akhela. Currently, that human capital continues to operate in a number of software development companies in Sardinia.

I often think back to that period, from 1992 to 1999, and I am still grateful for the opportunities that CRS4 gave me at that time, not only in the professional field, with challenges that I never imagined I could face, but also by allowing me to deepen my knowledge of the miniature continent that Sardinia is, so unique and fascinating.