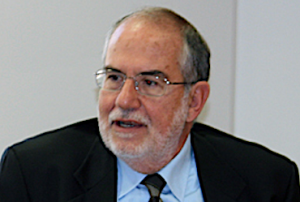 “This morning I met the CRS4 researchers at the Pula technology park. They are real wizards who are doing wonderful, incredible things. And do you know how much they earn?" This was Valter Veltroni speaking at the meeting in piazza Garibaldi (Cagliari) during his election campaign. The concept of magic was also used by Paolo Fadda, historian of the Sardinian economy, in an article for the Chamber of Commerce: "magicians working in the fairy woods of the Pula technology park". In fact, there must be something magic, since so many talented researchers have turned down attractive offers of employment elsewhere in order to stay in Pula. Astonishment is certainly the prevailing reaction among visitors to the Technology Park, but there is also a negative side to this surprise, which presupposes a lack of knowledge of what happens in Pula on the part of political and economic sectors in Sardinia. I believe that one of the main problems of CRS4 is precisely this: for Sardinian politicians, at least those who knew of its existence, it was something to show off to amaze visitors, both public and private, rather than a great reservoir of very rare skills from which to draw to try to bridge the technological gap in almost all branches of the Region's activity. In the six years of my chairmanship of Sardegna Ricerche, for example, I never had the pleasure of a visit from the Regional council's committee in charge of research and innovation: it seemed as if the park existed only to be shown but not used. The main repercussions on the life of our region were not produced by a conscious integration of research into the Sardinian economy and society, but determined by chance events and individual initiatives. To give an example, I remember the emotion I felt when, (at the time I was a collaborator of Tiscali), Pietro Zanarini showed me a copy of the fax he had sent to Reinier van Kleij, then Grauso's consultant for the Unione Sarda, with which he proposed to create the on-line edition of the newspaper. It was that fax, framed and hung up in Renato Soru's office at Tiscali, that launched the adventure that led to so many records and the creation of an important IT sector in the Region (the only significant industrial initiative after the failure of the oil industry). The other major initiative has been masterfully recounted here by Francesco Cucca and has already helped to bring Sardinia into the forefront of the international scientific world: "a small island, great genetics".

However, it is worth reflecting on the fact that if the Sardinian political and entrepreneurial world had realized the development potential of the CRS4 researchers' achievements, there would certainly have been a major boost to the growth of our Island. But let's leave this aside for the moment. Instead, I wish Giacomo Cao, who has already shown great dynamism and the ability to turn research results into reality, to success in his difficult job.

I would like to use this occasion to remember Gianluigi Zanetti. Unfortunately, the Covid made it impossible to do it together, and there is certainly no need to tell you about his scientific skills, which you know much better than I do. I would rather like to recall a few episodes which made me particularly proud to collaborate, albeit from afar, in his activities. The first took place at the RAS (Autonomous Region of Sardinia) planning department, when he brilliantly defended one of his complex telematics projects against a university professor who challenged him, trying in vain to crush him with the full weight of his academic chair, obviously without succeeding because Gianluigi's arguments were very solid.
Another episode I remember was at the San Raffaele Science Park in Milan: San Raffaele was asking us to be involved in the purchase and management of a huge and very expensive new-generation computer specifically designed for bioinformatics calculations. Here too, Gianluigi had demonstrated, by convincing the scientists in front of him, the futility of this purchase, since a procedure he had developed and tested allowed superior and more certain results without making an unnecessary investment. I have no idea what happened to the project, but San Raffaele declared that, as far as bioinformatics was concerned, it would certainly have chosen to rely on the expertise of CRS4.

The third episode is less relevant from a scientific point of view but is dearer to me from a human point of view. We were in Istanbul for a coordination meeting of an International society of infectious diseases. Gianluigi had to provide the computer platform for the society's on-line journal, a task he had performed brilliantly but not without first exasperating the president of the association, who would have been satisfied with a normal product, keeping him waiting because, as was the nature of Gianluigi, he could not provide him with trivial solutions but was committed to a much more complex task.

Anyway, once the meeting was over, we had several hours to wait before leaving for Cagliari.
Since we were in one of the most beautiful cities in the world, it seemed natural to use those hours to visit some of the Istanbul wonders, but I had to work hard and literally drag Gianluigi, who had installed himself in front of his PC, to spend those hours working. I like to think I made him a nice gift, forcing him to visit Hagia Sophia, the Blue Mosque, the Topkapi, the Basilica Cistern ecc...

The human relationship with the magicians of CRS4 in the splendid setting of Piscina Manna had a special meaning for me: I could finally live a non-trivial part of a vision that I had in an reported article published in 1986 in Nuova Sardegna where I pictured a Sardinia like a " laboratory of the Mediterranean " and it rarely happens that you can live in your dreams.