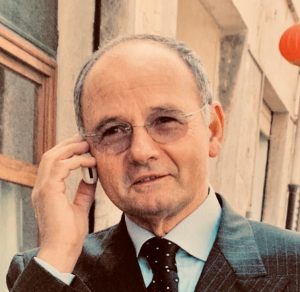 “I was born in Sardinia”. This is how Grazia Deledda proudly began her acceptance speech to the Swedish Royal Academy on receiving the Nobel Prize for literature, the only one awarded to an Italian woman writer. She continued by saying, “I have lived with the winds, the woods and the mountains… I have listened to traditional songs and music, folk tales and yarns”. This is the Sardinia that I have always wanted, that is part of who I am and that I will defend forever. But at the same time I have also striven for that Sardinia to be flanked by another that looks to the future. A Sardinia shaped by the great minds of the past but also by revolutionary thinkers of the present day, a time when slow changes have been replaced by sudden, disruptive acceleration, driven by constant technological innovation.

It seemed apt that another Nobel Prize winner would join Grazia Deledda in leading us along this new path. I thought that this Nobel laureate could only be Carlo Rubbia, not only on account of his vast and undisputed knowledge, which transcends the boundaries of physics, but also for his outstanding communication, leadership and networking skills. In the second half of the 1980s, a wind of change started to blow on an island still anchored to a mainly agro-pastoral economy that fell short of its development potential, to declining petrochemical and mining industries, infamously dubbed “cathedrals in the desert”, and to research activities conducted within the walls of the universities.
What was needed was a step change, innovative momentum, to put Sardinia on a new path of growth, to design an economic development model which at the same time would preserve and enhance its unique age-old historical, cultural, social and environmental heritage. This is how the Science and Technology Park was born, initially under the leadership of Consorzio 21 (today Sardegna Ricerche) and CRS4.

In a free market context, economic processes in general, but especially those that have taken root over time, are often resistant to change. This means that the effects of economic policies aimed at structurally modifying an entire production system can only be measured in the medium and long term. However, 30 years are indeed a long time, enough for us to look back and assess the impact of CRS4 on our island’s development. Over these decades, Sardinian society has become increasingly aware of the potential of intangible assets and activities. We have experienced a strong growth in new economy businesses (software, hardware, ICT, etc.) at a higher rate than the national one. This has enabled our region to achieve ambitious goals and records. To mention a few: the first Italian website, the first public domain browser, the first online Italian daily newspaper, the first search engine, the first worldwide web mail, the first Italian commercial ISP - Video On Line, and then, in the late 1990s, the birth of one of the main European Internet operators: Tiscali. These achievements, together with several pending and granted patents, show that the initiative has been a success. However, it must be said that these individual results, while outstanding, have so far been unable to permeate the economic fabric as drivers of a new development model. Today, I believe we should build on what we created in those years. We should review the goals and operations of the various players at the Science and Technology Park of Sardinia, including CRS4, to ensure that, as was the original vision, they ignite rapid development within our production system.