28 October 1993: "What about a WWW/Mosaic electronic version of L'Unione Sarda?" 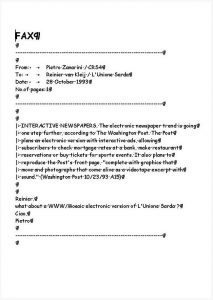 With this fax begins the project that will lead to the online publication of the first European newspaper a few months later. Below is an excerpt from the book "Gazzette digitali. L'informazione locale sulla Rete globale", Andrea Bettini, ed.it, 2011

PZ: Everything was born out of a mixture of serendipity, luck and ingenuity and, later on, Nichi Grauso's entrepreneurial intuition. In October 1993 I was running the scientific visualization group and, via Usenet news, I read a very general note according to which the Washington Post was thinking of putting its own web version with graphics on the Net. I knew Reinier van Kleij, the Dutch system manager at L'Unione Sarda, and I proposed by fax to collaborate to anticipate the americans.

PZ: I used the fax because the newspaper did not yet have the email and internet connection. The Net at the time had a very low diffusion. At that time the student Marc Andreessen had just released the Mosaic browser version for Unix. The web, created at CERN in Geneva in 1989, was still little known and used.

AB: Despite everything, however, the project was appreciated ...

PZ: Reinier Van Kleij welcomed the idea with enthusiasm. We entrusted the work to a graduate student, Francesco Ruggiero, who was graduating in computer science in Milan with Gianni Degli Antoni, one of the members of CRS4 scientific committee. In April 1994 we put the site on the Net without announcing it in a particular way. Yet users began to use it and write. A few months later, after accumulating a good amount of positive comments, we thought it was time to show the product to the publisher.