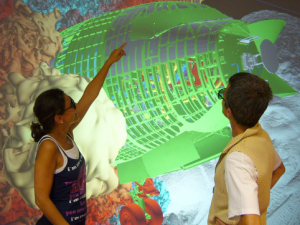 The interactive exploration of massive surface models generated by acquisition, simulation, or modeling has always been an extremely challenging task. In the early 2000s, CRS4 was among the first groups to take full advantage of the power of newly developed GPUs to offer effective solutions. In this context, one of the main results achieved by the CRS4 Visual Computing group is the introduction of a new breed of coarse-grained multiresolution models based on hierarchical volumetric decomposition, which allowed the development of the first high quality GPU accelerated techniques for rendering massive meshes and point clouds. These methods enabled, for instance, the first fully interactive visualization on commodity platforms of the Digital Michelangelo (2004) and of the complete CAD model of the Boeing 777 (2005).

A large number of different methods and publications resulted from this work. In particular, the first application to multi-resolution triangle meshes was presented in the following publication:

The first application of these concepts to large point clouds is
described here:

A new solution applicable to general models was described for the first
time in the following article:

In the next decade, many other solutions followed.