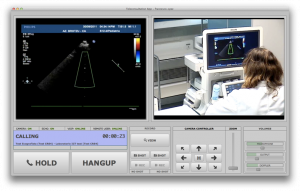 On 14 November 2008, a partnership between the Brotzu Hospital in Cagliari and CRS4 launched a real-time telemedicine project for congenital heart disease, through an innovative system based on low-cost open technologies, tested for the first time ever in Sardinia.
The system enables the execution of an ultrasound scan with remote guidance, through real-time audio/video streaming of the video of the ultrasound scanner and the test setting. The trial, which continued in 2009, was conducted at the Paediatric Cardiology Department of Brotzu Hospital by the CRS4’s Data-intensive Computing team and demonstrated that the prototype could be used in clinical practice. The system was then also successfully applied to emergency paediatric ultrasounds at the Burlo Garofalo Research Hospital in Trieste. In parallel, in collaboration with the Paediatric Cardiology Department of Cagliari, a mobile version was created, with additional augmented reality features for improved operator guidance.