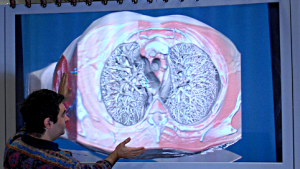 CRS4 was among the first research centers to develop efficient visual computing methods and techniques to exploit the potential of new multi-projector light-field displays capable of creating virtual holograms in real-time.

Meeting the performance constraints required by these systems is a challenging task, since they require the generation of hundreds of specially distorted renderings for each light-field frame. For these purposes, we have created and developed specialized user interfaces, calibration methods, and surface and volumetric rendering techniques for both single processor and distributed parallel rendering.

Our results have been the subject of several publications and demonstrations (for example, at the SIGGRAPH 2006 Emerging Technologies event in Boston).

Innovative solutions for massive surface and volume rendering and
interaction on the displays were described in the following articles:

In the following years, many other solutions followed.