Liceo Alberti of Cagliari, first italian school online and the first in Europe with a Web server managed by students 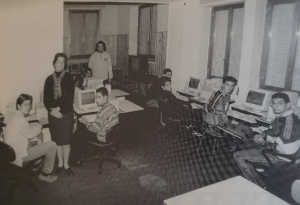 In 1994 CRS4 with Gianluigi Zanetti proposed to some high schools in Cagliari to use the Internet at school. The Principal of the Liceo Scientifico Alberti, of Cagliari, the physicist Ugo Galassi, answers warmly and involves a young professor of physics, Roberto De Leo, who in turn enters the project with enthusiasm. Then a group of students follows a training course organized at CRS4 and immediately they become the first students in Italy to manage a school website and the first in Europe to use a web server.

Roberto Deleo (now professor at Howard University in Washington, since 2013) recalls his experience: «I remember very well the adventure of the Liceo Alberti in the web. And I still remember, with nostalgia, my first contact with CRS4. It was with Gianluigi Zanetti, well-known Zag. At that time I knew nothing about Linux and Zag gave me a monumental Slackware manual to learn quickly. I accepted with enthusiasm and he, perhaps a little surprised, asked me if I already knew Linux. I answered him that I knew absolutely nothing about it. Thanks to the foresight of the school principal, Ugo Galassi, there was immediately carte blanche for us and we had a lot of fun. After an early spring when we started preparing a group of students, for most of my classes but also with elements from other schools, we wondered with Zag if they would all evaporate in the summer as often happens (it would probably be the end of the project). Instead, that summer all the most interested students were literally glued to CRS4, where we were all together learning and developing the school's website. In my case, then, this impromptu adventure contributed in an essential way, always thanks to Zag, also to the development of my scientific career and therefore remains as one of the fundamental moments of my career»

The memories of Kanthan Pillay, system manager of the CRS4 at that time (today administrator and consultant of several ICT companies): «Dr Gianluigi Zanetti, a colleague in the Scientific Visualization Division, comes to me with a proposition. What if we were to find an affordable way to connect the Sardinian school system to the resources of the internet, especially electronic mail and news? There's a wealth of information out in cyberspace; literature, scientific texts — all of it free.
This information could be translated into Italian and Sardo and redistributed, and discussions could be held around these issues in cyberspace. We brainstorm over several lunch sessions and I come up with a working model which I christen Mirtonet (Mirto is the word for the ubiquitous myrtle berries which are as synonymous with the island of Sardinia as is the protea, South Africa`s official national flower, with the Western Cape).
I won't bore you with technical details, but the principle is quite straightforward. There are a number of companies that are buying Internet connectivity from CRS4 primarily for electronic mail. These connections lie idle at night. Mirtonet will allow PCs at school to dial into the company networks at night to exchange mail and news. It's of no cost to the company since they have already paid for the bandwidth, it's of low cost to the school since phone calls are always local and and cheaper at night. Capital cost at the school end would be an entry level PC and a modem with free software based on Linux written by my team at CRS4. Gianluigi translates the model into Italian, local schoolmasters and businesses are enthusiastic, and we are soon up and running»