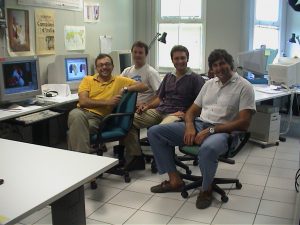 In 1997 Carlo Rubbia involved CRS4 in the Energy Amplifier Project (also called Rubbiatron): a subcritical fast nuclear reactor (Accelator Driven System) coupled to a particle accelerator and cooled with liquid lead, able to use as fuel the radioactive waste produced by traditional nuclear reactors, together with thorium, a widely available element. The Rubbiatron also has another important feature: radioactive waste has a much shorter half-life than that produced by normal fission power plants.

After leaving CRS4, Stefano Buono (the first from the right on the photo, which shows other researchers involved in the project) worked on a patent for radioisotope production. In 2002, he founded the company Advanced Accelerator Applications - which in 2015 went public on Nasdaq in New York - and was its CEO until 2018.

Stefano Buono recalls his years in Cagliari with these words: "I remember with great pleasure my time at CRS4 because our group was pursuing a cutting-edge project that promised to be a global game changer. Indeed, in 1995, CRS4, together with Ansaldo, with a State-funded budget of ITL 30 billion, designed the first industrial prototype of the Energy Amplifier, a system for producing nuclear energy in a clean, safe and inexhaustible way. Although the technology was set aside for a number of reasons, it is now more relevant than ever, and I am sure that within 10 years it will come into being, securing CRS4’s place in the history of this extraordinary innovation."