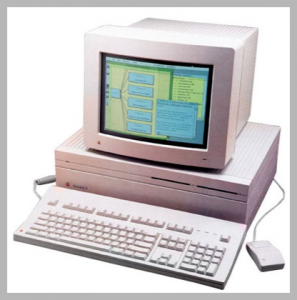 February 1991. CRS4 gets its first computer. It is an Apple Macintosh IIfx, which is connected via telephone line and a 4.8 Kbit/s modem with the Cagliari section of the INFN, the National Institute for Nuclear Physics, thanks to the hospitality of its director Sergio Serci and his collaborators, Alberto Devoto and Alberto Masoni. Since this moment, the CRS4 is connected to the Internet.

March 1991 GARR, the Italian research network, registers crs4.it as an autonomous internet domain (IP 156.148.xxx.xxx). The CRS4 now has a direct Internet connection, starting at a speed of 64 kbit/s, which later rise to 256 kbit/s, then 2 Mbit/s, up to the current speed of several hundred Mbit/s.

April 1991. The second computer is delivered to the Centre and the first LAN is set up.
The computer is a Silicon Graphics SGI 4D 420 VGX workstation, and came with a price tag of one billion ITL - however, CRS4 was able to get it at half price through the close cooperation between the European headquarters of Silicon Graphics in Geneva and CERN). The computing power was provided by two 32-bit 40-MHz MIPS processors. The graphics card - which made up half of the workstation’s total price - had a speed of one million triangles per second. This workstation had the computing power of an old smartphone, but cost one thousand times more. A section of Ethernet cable connected the SGI with the Mac: the Centre’s first LAN was born.