Mathematical models and computer simulation of cell growth and proliferation 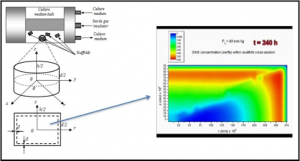 In the early 2000s, following pioneering work carried out by an MIT research group in the emerging field of tissue engineering, CRS4 researchers began to develop mathematical models and computational codes for the simulation of engineered cartilage growth produced in a rotating bioreactor developed by NASA.

The engineered tissue, to be transplanted into patients, is obtained in bioreactors where cells can grow and proliferate in a nutrient - and O2 - containing culture medium with controlled levels of CO2 and temperature. The image shows a schematic representation of the modeled system at CRS4 and a typical simulation of cartilaginous tissue growth under microgravity conditions.