Filing of a patent for Solar Power Towers 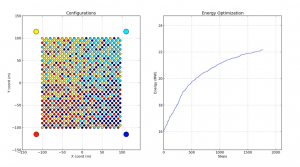 On 5 February 2013, CRS4 filed a national patent application for a "Procedure and device for the control of a concentrating solar power system with several towers with heliostats", later published on 7 August 2014, authored by Marco Cogoni and Erminia Leonardi.

The aim of the invention is to improve the control of concentrating solar plants consisting of several towers with heliostats (mirrors) and the flow of extracted energy, through a process that includes simulation software.

This is a sophisticated software application able to optimise mirror orientation in real time according to the sun’s apparent movement and varying irradiance conditions (e.g. in cloudy weather). The optimization software uses a previously developed numerical simulation code that calculates accurately the solar energy collected by a multi-tower solar power system.

Thanks to this invention, infrastructure being equal (heliostats, area covered, power block, process water, etc.), the software increases the system’s power output by 30-40%. At the same time, it is possible to optimise the size of the area occupied by the mirrors and the height of the towers, reducing visual impact. This mirror control system also makes it possible to install the solar power systems on hilly land of little agricultural interest.