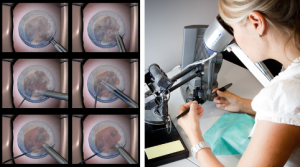 Many of our visual computing technologies have been incorporated over the years into real-time simulators for various purposes.

This work on surgical simulator led to several scientific publications.
In particular, an the first simulator of mastoidectomy with haptic and visual feedback was presented in the following articles:

The work on cataract surgery is described here:

In the following years, many other solutions and applications followed.