CRS4 file the patent for a Solar Pond 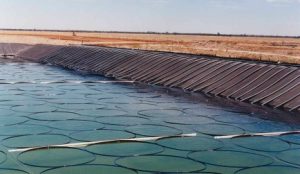 Under the proposed extraction method, the deep layer of the Solar Pond flows slowly while the higher-temperature brine is extracted from the tank and fed into a heat exchanger. After losing heat, the brine, now at a lower temperature, is conveyed into the Solar Pond. The heat, extracted at a temperature of about 70-80 °C, can be used to desalinate seawater in a conventional MED (Multi Effect Distillation) plant.