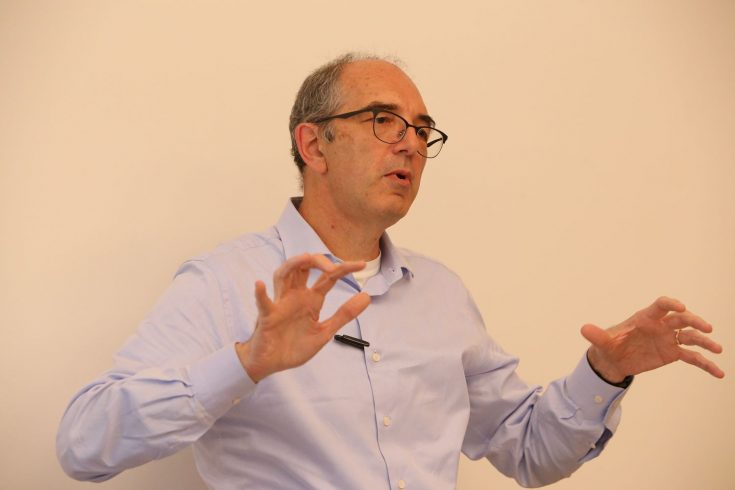 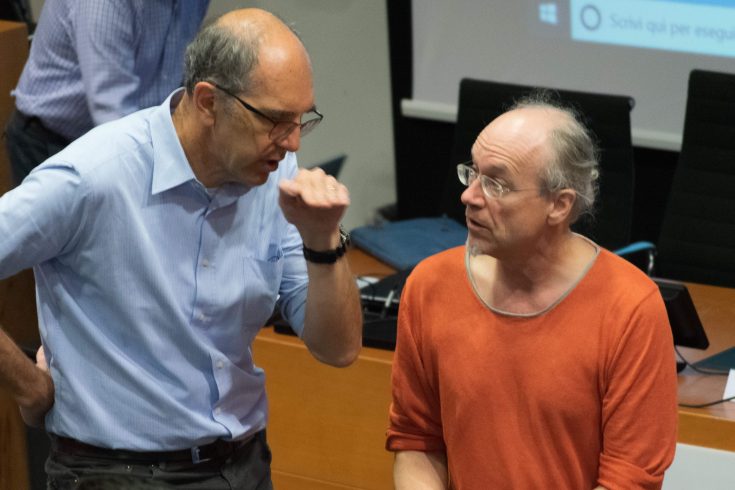 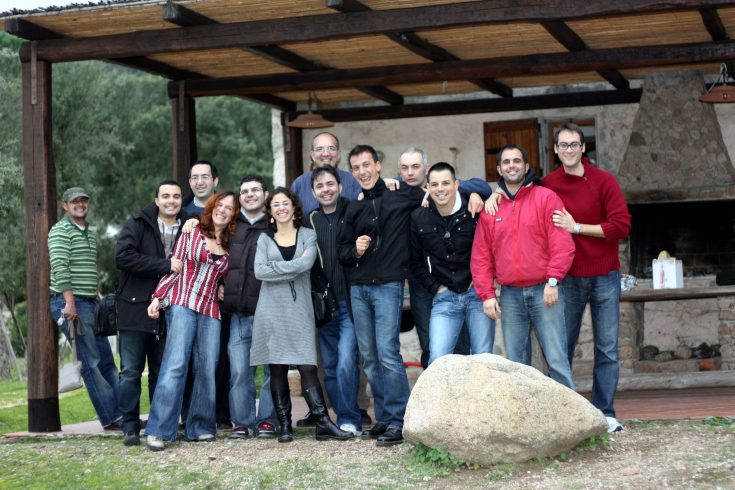 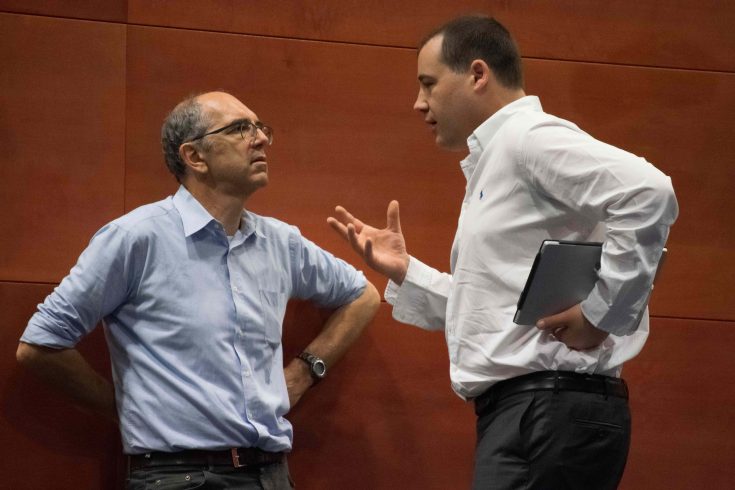 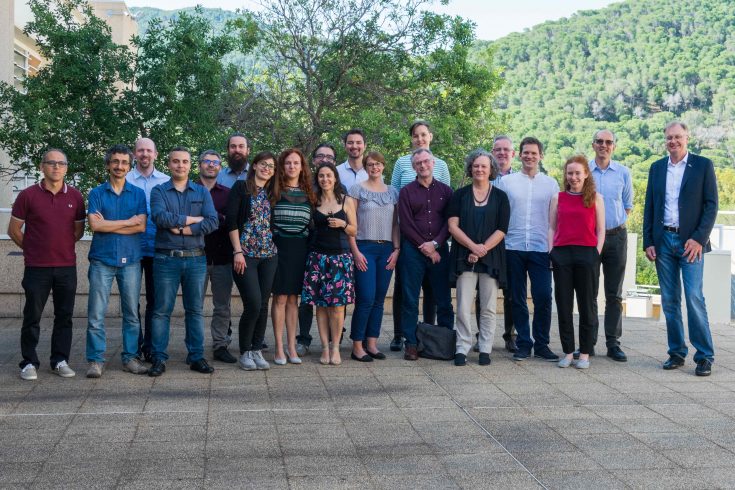 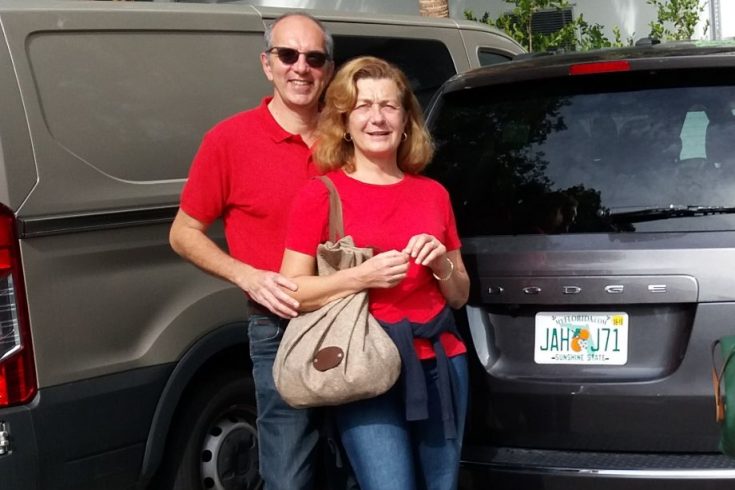 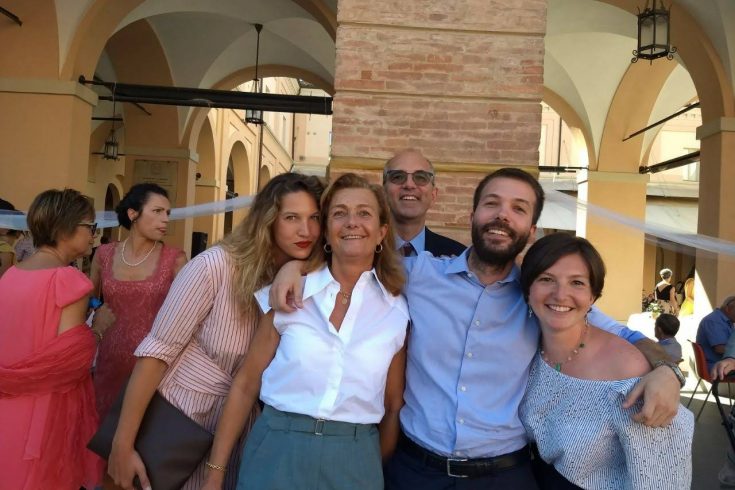 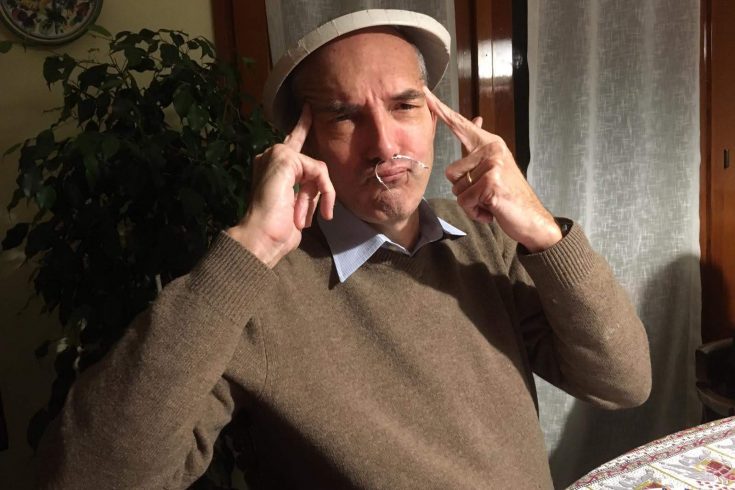 Guestbook list navigation12→
23 entries.
Roberto De Leo from Washington, DC wrote on 2021-06-28
Although we had in common a passion for scientific numerical explorations, I happened to meet Gianluigi Zanetti through a completely unrelated channel. For a while, before finding a tenured academic position, I taught Mathematics and Physics at Liceo Scientifico “Leon Battista Alberti”, a high-school in Cagliari (Italy). One day of Spring, in mid-Nineties, I had enough free time to go and check the PCs in our lab and found out that they were quite outdated – they still had 5 1/4 inches floppy disk drives! In the conversation that followed with my (enlightened) Principal Ugo Galassi, he mentioned to me, on the side, that some young researcher from CRS4, the Center for Advanced Studies, Research and Development in Sardinia, was looking for a teacher for an interesting project: training a group of outstanding high-school students to create the first school website in Italy.

His idea (quite unusual in those times) was to let the students themselves build and maintain the website, since it was they who would benefit the most from learning such skills (especially in mid-Nineties!) and, at the same time, their young minds would in general absorb much more quickly this (at that time) brand new technology than the teachers themselves. Little did I know, when I told my Principal that I liked the idea and that I’d contact Dr. Zanetti, that he would have such a powerful influence on my scientific life.

First of all, he was right. The group of outstanding students we directed got so involved in the project that they kept working on it hard throughout the whole summer – something unheard of in those times – and we ended up building not only the first Italian school website but also the first school webserver, a Linux machine installed and maintained by myself and the students and located in the school’s Lab, connected to the Internet through a dedicated line supported directly by the Italian’s Ministry of Education. Recall that, in those times, connecting to the Internet involved slow modems. Our school, on the contrary, thanks to the success of this project was connected 24/7 with a fast connection. It is hard to overemphasize the impact that this project had on the life of those students, many of whom found soon jobs in IT-related positions worldwide – this alone would be an interesting story to be told.

The impact was strong on me as well. Gianuigi (or Zag, as he liked to be called from his login name), was a person of many talents and deep skills and I absorbed from him several important ones.

One was Linux OS maintaining. While this might seem unrelated to science, it is actually the opposite: Linux is the best OS for numerical computing (currently, 99% of the 500 most powerful supercomputers use Linux or Linux-based OSs). Hence, even in mid-Ninenties I was able to easily run efficient scientific programs directly on my home PC. This became critically important already when I worked for my, mostly numerical, PhD thesis at University of Maryland, where I graduated in 2000 under S.P. Novikov. And is even more critical now that I maintain the small High Power Computational Cluster of the College of Arts & Sciences at Howard University. Another one was coding. Zag was an impressive coder of both interpreted (bash, perl) and compiled (c, c++) languages and working under his direction led me to become accustomed too to all these powerful tools. Since numerical explorations amount to about 50% of my scientific activity, I clearly owe him a lot.

Perhaps the most critical help from Zag came, again, just by chance. I must have mentioned to him my desire to get a PhD in Mathematics in the USA. Since I had gotten “full gpa” Laurea degrees in both Physics and Mathematics from University of Cagliari, I was hoping to get through local faculty some contacts to US universities. Somehow this just did not happen and it is not trivial getting a fully funded PhD student position at a good US university coming from abroad, especially from a peripheral location. It was Zag that suggested me to apply at University of Maryland – I would not have otherwise – and, unknown to me, wrote a strong support letter to his friend Alessandra Iozzi, at that time an Assistant Professor at UMD. I say it must have been strong because, a posteriori, I learned that she fought hard to get me a fully-supported position – in fact, out of the six campuses I applied to, that was the only one that offered me full TA-ship with tuition remission, without which I just could not have come to the US to complete my studies.

Ultimately, those few months of work under Gianluigi’s direction completely changed the course of my scientific (and private) life. After getting my faculty position at Howard University we did not meet much, but I would look for him whenever I’d be back in Sardinia and we’d meet briefly to have a walk and chat about the past and the future. He had always something new to teach me and his enthusiasm in talking about his activities or in making suggestions on how to improve mine was always the same: just the one of a kid in a candy shop. He passed away in a tragic accident in September 2019. This was an unfillable loss not only for his family but also for CRS4, for Sardinia and for anyone that had the luck and pleasure to interact with him. His passion and enthusiasm, though, always resonate in all of us.
Maria Chiara from Faenza wrote on 2020-02-14
Ciao zio, leggere questa pagina è spalancare la porta di un mondo sconosciuto a noi Campodoni di Faenza. Tu eri lo zio "genio", e questa parola serviva per coprire la mancanza di categorie mentali per definirti diversamente. Lo zio che il giorno di Natale rischiavi ti fermasse a parlare con uno dei suoi viaggi cosmici, come ha scritto in questa pagina Francesca, in cui io ti avevo già perso dopo i primi metri, ma continuavo ad annuire. E a fine serata puntualmente scherzavamo con le mie sorelle, "anche quest'anno l'avete lasciato a me"!
Leggere i commenti dei tuoi studenti, capaci di infiammarsi e seguirti più di me, mi fa capire che zio speciale che eri. Grazie! e grazie ai tuoi colleghi per questo tributo.
Questa volta a Cagliari veniamo, non possiamo mancare!
PS: a Natale 2006 ne avevo approfittato io, ti ho tenuto tutto il pomeriggio con me per consigliarmi il portatile. Mi fidai ciecamente, anche se mi consigliavi una marca a me sconosciuta (poco commerciale). Non ti ho mai detto però che con quel portatile feci un figurone con i miei compagni di università, e recentemente l'ho ricominciato ad usare in attesa di riparare quello di casa. Funziona ancora! E ogni volta che aprendolo vedo quel logo, ti penso!
Ilaria from Cardiff wrote on 2019-12-08
Losing you is like losing the ground where I am standing. I miss you Dad.
Matilde from Cagliari wrote on 2019-12-03
Papà, com'è assordante la tua assenza.
James A Glazier from Bloomington wrote on 2019-11-24
Gianluigi and I were graduate students together in Chicago and interacted a great deal. In that period, I was working in experimental fluid dynamics and he was working on his computational fluid dynamics methods so, despite much fruitful discussion we never wrote a paper together. I visited him a good deal when we were both postdocs in New Jersey and I had the pleasure of seeing the start of his family. He and his family were very kind at a difficult period in my life and I don't think I would have stayed in science without their support. After he moved back to Cagliari, I saw him only occasionally--we talked of visiting, but it never happened. Ironically, as we saw less of each other in person, my own research work evolved towards his. These days I am working closely with people whose fluid-dynamics code is based on ideas that GIanluigi pioneered. I will miss him very much.
Benedetta from Cagliari wrote on 2019-11-23
Gigi com'è complicato lasciarti andare
renata from cesenatico wrote on 2019-10-28
Le persone speciali arrivano in punta di piedi...ma quanto rumore nell'anima quando se ne vanno.
E poi c'è chi rimane ( penso soprattutto a moglie e figli ).
Nonostante la vita.Nonostante tutto.
Anche quelle sono persone speciali.
Gianluigi era speciale ma mi piace definirlo " diversamente normale ".
Porto con me tanti ricordi di tranquille ma spesso indecifrabili chiacchierate sotto l'ombrellone.
Ruben from Bologna wrote on 2019-10-10
The Italian who is playing games

The first day of internship at Brotzu, after bragging with Andrea Giacchetti
of your Gentoo installation on the Dell 11-inch (which your hands completely covered),
you told me, "We're willing to teach you, but we want you to commit." I think it was
the most severe sentence you told to me in 11 years of being my boss. I hope I've learned even just
a little of your teachings. Thank you for everything, Zag. Goodbye
Guestbook list navigation12→
Manage Cookie Consent
We use cookies to optimize our website and our service.
Manage options Manage services Manage vendors Read more about these purposes
View preferences
{title} {title} {title}