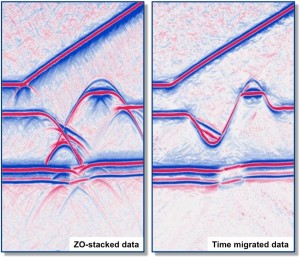 The formulation and the practical implementation of methods to automatically obtain an image of the Earth’s interior is a long-term dream in the geophysical community. This problem has stimulated the curiosity of geophysicists and its solution would dramatically change seismic processing and improve oil and gas exploration. Several attempts have been made over the last two decades to obtain such a result and nowadays every oil company and contractor is still strongly committed to achieving it. The theoretical work of the ING team was then devoted to showing that velocity-independent time imaging, only driven by data, is possible.

In our idealization, the subsurface is modeled as a collection of diffracting points, each one being treated as a buried source of waves characterized at the surface, in the 3D case, by the emergence direction and by the two principal wavefront curvatures. The introduction of an auxiliary uniform model leading to a simpler propagation law has been of paramount importance to deriving the traveltime formula for the non-uniform medium. For each emerging wave, the corresponding (non-hyperbolic) traveltime can be formulated in two domains, either in the zero-offset-stack volume or in the time migrated volume, where the final image must be formed on each pixel, concurrently.

The implementation has demonstrated that it is possible to move time imaging from the solution of the partial differential equation that models the medium response, into a data-driven optimization problem. This work represents an important step in seismic imaging and has opened new perspectives on data processing, in both isotropic and anisotropic media.